The Story of Oz Whistles, by Mitch Smith 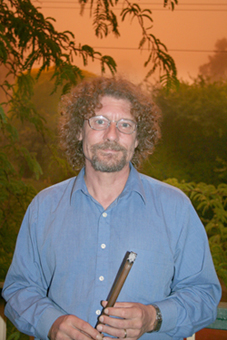 Way back before the birth of Oz Whistles, so long I can hardly remember it now - I believe it was in 2005, my wonderful wife Ayca decided, at last, to learn how to play the fiddle. It was something she had always wanted to do.

I was determined to give her as much support as I could. In fact - I would learn an instrument along with her, so we could share and encourage each other. But what instrument? It had to be something humble, something that would go with fiddle, enough for us to play awful duets on our way to passable playing. Of course! There was only one instrument humble enough and yet with enough use to help a fiddle along - the mighty pennywhistle! And it would cost me no more than a coffee from my favourite barista! Little did I know...

So off I went in my ignorant search for the most humble of all musical apparatus. Years ago these things adorned the counters of every second shopfront. But my expectation of a whistle-stop purchase was soon dashed. Not only did the second shop not have one, but neither did any music shop - first or second! After scouring every major city music store, I got utterly sick of being told that "sometimes we keep one - they have a CD and a book. We can order one if you'd like". A CD and a book? Why would you need a book for a pennywhistle? Let alone a CD! And why did nobody have one? There was no way I was going to buy an instrument I didn't try-out first. Frustration only made me search harder. I started looking for the old specialised folk music shops. They once had everything you could pluck, scrape or thump from every country not populated by the deaf. A frustrating hour on Google, yielded very little I could make sense of. The old shops no longer existed.

Feeling somewhat dated and out of touch, I persevered. I would not let this little tin leprechaun escape! At last, a few days later, I finally found a full set of Generation flageolets in a pawnbroker's shop. So I bought the lot. The nickels, the brass and the one calling itself "folk whistle". I could do a day, or two, without coffee!

It was only after I'd got them home and had tooted them all from the Bb to the G, regaled the walls with "Mary had a little lamb" and "Jingle bells" in every key, that it dawned on me that a book might just be a good idea, and what the hell, A CD wouldn't hurt either.

So I pulled out an old Chieftains CD. My good wife and I decided which songs we liked and would learn to play! Within a few weeks, we could even play a few of them slowly and in tune. But something seemed wrong. What are all those twiddly bits? How come it sounds so full of life when the Chieftains play it and not when we do? I just assumed a bit more practice would solve that riddle.

Only a few days after that, I dropped into one of the local music shops and found, to my surprise, a penny whistle that was not a generation. It was called Feadog. The proprietor told me it was one the "professionals" like to use. So I bought it feeling that this might be the missing link - that my inability to sound like the Chieftains was a problem with my instrument - and now I had a "professional" one!

It was true, the instrument sounded better and was easier to play, but those twiddly bits still eluded me.

"Twiddly bits" yielded very little on Google that was not X-Rated. After refining the search a bit more I found "www.thesession.org" which introduced me to some more helpful search-words like "session" and "traditional" and a whole lot of other stuff that seemed meaningless at the time. Before too long, a whole new universe was unfolding before me. Literally hundreds of sites that had something to do with tin whistles or Irish traditional music.

But where to start? Around about that time I happened upon The Wandering Whistler's site . Here I found signposts for the lost such as me: Tunes, Whistle reviews, Links, but best of all: the world of whistle as seen by one trailblazing individual! This was the accessibility missing elsewhere on the web, and I remain a grateful admirer of what Greg has done, and continues to do.

So then with the help of Wanderer's links, I found out what those twiddly bits were: Cuts, Taps, Rolls, Crans, slides, triplets, vibrato and more (thanks also to Brother Steve's Tin Whistle Pages!). The astonishing array of whistle makers in wanderer's reviews, showed me just how many pennies you can fit into the modern whistle and what you get for them.

Inevitably, I found my way to Chiff and Fipple .

I noticed one or two fellow Australians on C&F, but the whole thing seemed to be happening in the USA or Britain. I felt that Oz was somehow left-out. Perhaps, in time I could add my own little bit to the Oz contribution - so I'd better get on with it.

I was keen to get contact with local players and get a taste of playing in the company of more experienced musicians. There were a couple of local sessions listed in www.thesession.org, one of them was quite close at the Harp hotel in Tempe, just south of the Sydney CBD. So off I went to check it out. With "noob" written all over me, I introduced myself and was made welcome. I was even feeling a bit comfortable until the music started. Then I realised I'd sat myself down in an advanced session. So I quietly kept my newly "tweaked" Feadog, hidden in my coat pocket and settled in to listen. As more players turned up, I was astounded by how many accomplished players there were; fiddlers, Uilleann pipers, Northumbrian pipers, bouzouki players, banjo players, bodhran players (how do you pronounce that?), singers and Whistlers, high and low! I returned, with Ayca as often as we could. Each time learning new things and getting an idea of what tunes we should be concentrating on.

By stages, my small passion had grown to a major commitment. I came to accept that the pennywhistle journey was endless. It will probably take years before I begin to master the instrument. I realised that this commitment would gladly consume a lot of time, which presented a paradox. How would I be able to maintain this commitment and keep on top of my demanding day-job?

The answer was slowly dawning on me. Seemingly without prompting or effort, the idea of starting a whistle shop began to grow. It would keep myself close to the instrument and music I had grown to love. It would allow me to share it with my fellow Australians and help other noobs like me. Pennywhistles for sale? I would need a lot of pennies to do that in the city. It would have to be somewhere else, somewhere close enough to the city to stay in touch. The answer to that was obvious. The Blue Mountains - I grew up there. I missed the beauty and wildness of it. We did our sums and it all started to add up to something worth while. I started contacting tin whistle makers around the globe.

Since we moved here, I have found several world-class luthiers including Erle Bartlett (SYN and Black Diamond whistles) and Ian McKenzie (well known Uilleann pipes maker) and a stack of sessions all within a 30 minute drive. Everything seems to be falling into place. Oz Whistles has kicked off and is growing nicely.

We would like to thank all the wonderful folks who have encouraged and supported us so far.

The story continues on the "News" page where I'll keep every one posted with noteworthy developments and anecdotes of the Oz Whistles saga!

Best regards to all